Lose 2% EXP
3% chance to drop any item in inventory

You can drop more than one item on character death.

Items dropped on the ground (or on character death) will not appear to other players for 20 seconds.

Once items become visible to everyone, the items on the ground disappear after 40 seconds.

You can edit all default game controls via the options menu.?? 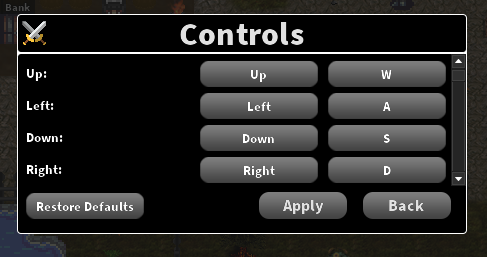 There are two damage types: Physical Damage, and Magic Damage.

Strength: only applies to Physical Damage. It works to increase your base damage and also to offset a target's Defense stat. The greater your strength stat is, the more base Physical Damage increases.

Magic: only applies to Magic Damage. It works to increase your base damage and also to offset a target's Defense stat. The greater your strength stat is, the more base Magic Damage increases. 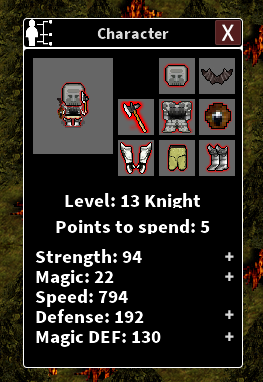 There are extra effects to some skill which each have a unique effect on the target.

Silence:
blocks the use of skills / spells.

Stun:
prevents the target from attacking or moving.

Snare:
prevents the target from moving.

Cleanse:
removes all status effects on the character.

Shield:
adds overflowing health points to the target's health bar; e.i. it creates a shield that must be destroyed in order for HP to be damaged. It disappears after the effect's duration.

Sleep:
same as snare, but shows the word "Sleep" on the screen.

Onhit:
this indicates that if for example you are doing a spell of healing or damage of time, here it indicates the time between attack and attack or healing and healing.(???)

Tuant:
it creates noise to attract enimies towards you.

You can send a Party request through the targetting. 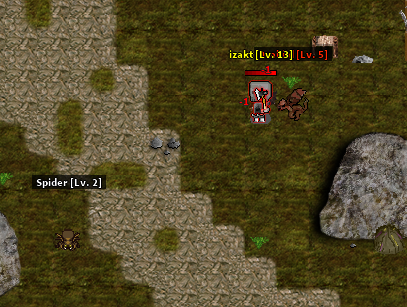 The EXP system will flux depending on Character Level vs. Monster Level.

If Character Level value is at least 10% lesser than the Monster's level, the character earns bonus EXP.

If Character Level value is within 10% of the Monster's level, the character earns full Base EXP.

If Character Level value is at least 10% greater than the Monster's level, the character earns a reduced EXP amount.

If in a party, the monster's killer gains their normal amount of EXP. All Party Members in range will gain 1/4 of the EXP each individual would have earned if they were the killer. (For example: if a character earns 100 EXP from killing a Spider by themself, then they would earn 25 EXP when any character in their party kills a Spider monster.)

There is a PVP System and dedicated areas that PVP can be held. 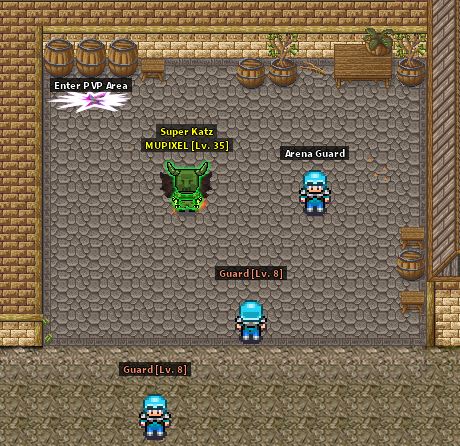 There is a PVP area located at the west gate of Scepia's city.

You must be at least level 8 to enter the area.

A warning message will appear on your screen when you are about to enter the area.

Normal character death conditions apply if you die in the PVP area (items will drop on death).

When you kill another player, your character's PK Count will increase.

To exit the pvp area, you have to go around the fence to the portal. 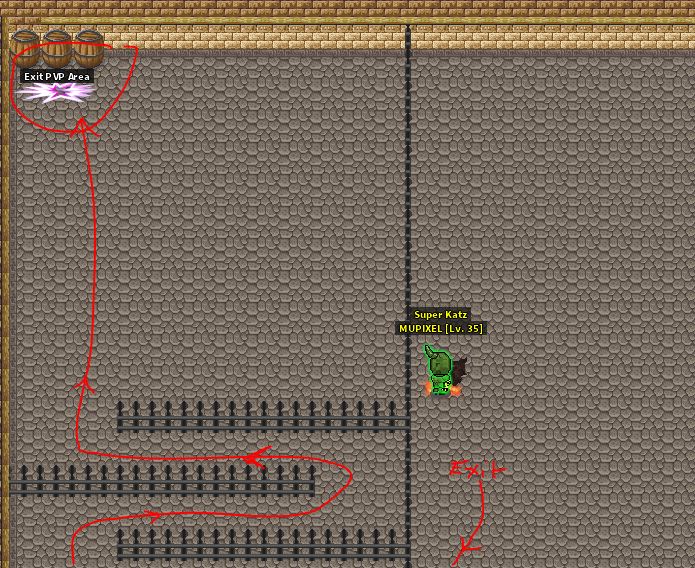 You can clear your PK Count for x10,000 Zen by talking with the Arena Guard.

When you clear your PK Count, you will earn PK Tokens based on your current PK Count.

PK Tokens can be used to buy various items in the PK Shop.

Talk to the Arena Guard to open the PK Shop.